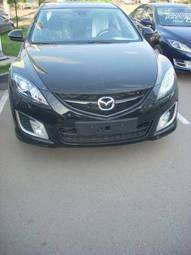 Mazda MAZDA6 Problems
Flat spot when changing gears
2008, drives fine,come to stop then as soon as
you pull away theres a flat spot inbetween chan...

There are a lot of midsize cars on the road today, but the MAZDA6 is different from all the others in two very significant ways. Most noticeably, it is the only midsize model line to offer three distinct body styles to fit your style and utility needs. More importantly, it is built with a strong emphasis on driving dynamics. As one look at any of the 60-plus international awards the Mazda6 Sports Sedan has received clearly shows, no other model line in the class delivers the ride and handling characteristics near and dear to a driving enthusiast's heart like a MAZDA6. Whether you choose the utility and sophistication of the MAZDA6 Sport Wagon, the well-executed mix of space and sportiness of the MAZDA6 5-Door or the muscular refinement of the MAZDA6 Sports Sedan, you'll experience road-hugging handling, exceptionally precise steering, instant throttle response and an immeasurably satisfying sense of sheer responsiveness every time you get behind the wheel.