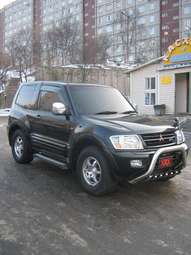 Mitsubishi Pajero Problems
Oil leak from head gasket
1999, Hi, i had a problem with oil leaking from
the head gasket sealer, so i tried replacing i...
Starting the car
2001, back fire when you starting in morning
brings a lot pressure within the engine after
tha...
White Smoke and Engine oil getting less
2008, I have Pajero 2008 model. I change oil
every 5,000 kms. However after driving aroud
2,...